Get ready to get your giddy up on! 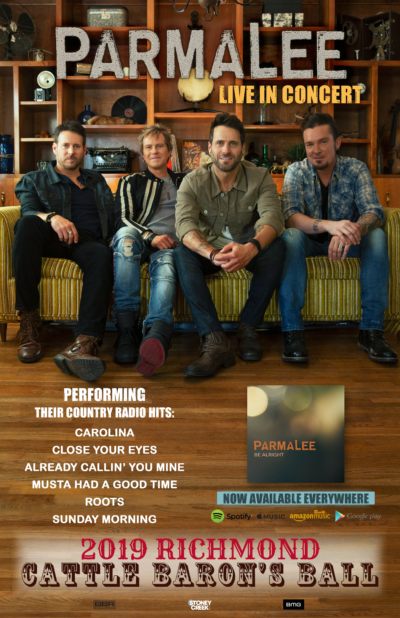 Comprised of brothers Matt and Scott Thomas (lead vocals and drums), cousin Barry Knox (bass) and their best friend Josh McSwain (lead guitar), Parmalee are the quintessential American Country band. Named after the small town where the band started, Parmele, N.C. (population 278), the chart-topping quartet pays tribute to their humble Carolina upbringings with their name and their sound. Raised on a diet of Southern rock, Country, and Blues, they formed in 2001 as a bunch of small-town boys chasing wild weekend nights, but their talents eventually took them beyond the little cement block barn they rehearsed in and onto Country music’s biggest stages, not to mention the top of Billboard’s Country chart.

The band’s blue-collar persistence made their 2013 breakout single, “Carolina,” into a Platinum-certified #1 hit, while their debut album landed in the Top 10. Two more singles (“Close Your Eyes” and “Already Callin’ You Mine”) rose to #3 and #10 on Billboard’s Country Airplay chart, all while they kept their noses to the grindstone, touring hundreds of dates a year. Awards nominations from the Academy of Country Music and Teen Choice Awards came rolling in, and headlining tours were launched but the hard-working virtues of their upbringing stand tall.

Parmalee continues to be one of the hardest working touring bands on the country music circuit and now more than ever, they exude the spirit that built the foundation of their music. The band brings the fire with them on stage every night, delivering high-energy shows to enthusiastic fans clapping and singing along, wrapped up in rafter-shaking abandon. Eyeing the crowds’ response, one thing is very clear– Parmalee knows a thing or two about having a good time.

Catch Parmalee taking the stage on the night of October 19th, 2019 at the 2019 Richmond Cattle Baron’s Ball!

Check out their latest single “Be Alright”!